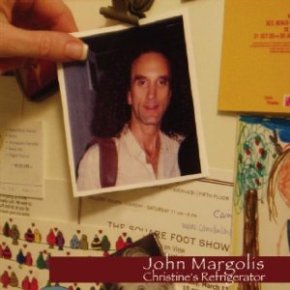 “Christine’s Refrigerator,” the title track to the John Margolis: Christine’s Refrigerator album, written and produced by John Margolis and Don Rosler, has had a good number of fervent fans over the near-decade since it was first released, including Jonathan Schwartz (and many of his listeners) on WNYC, NPR’s The Kitchen Sisters, Bob Telson, Hugh Prestwood, producer Alain Mallet and the late great Arif Mardin. Another passionate fan of the song happened to be a woman named Christine, that is, the remarkable and prolific singer-songwriter Christine Lavin, who has now brought “Christine’s Refrigerator” to a new dimension with her labor-of-love video. Within a week of releasing the video, “Christine’s Refrigerator” was featured in a wondrously witty article by Pulitzer-prize winning journalist Jim Dwyer: “Taking Inspiration From Song and Pictures on the Refrigerator.

Watch video here:
The song is at turns humorous and heartbreaking, as Margolis sings at the top:
“I want my picture to stay
Up on Christine’s refrigerator
Though I’m no longer with her
I want to stay there taped between
Her sister with her birthday cake
Her little brother standing on his head…”
This sets in motion a beautifully composed and orchestrated, one-of-a-kind ballad featuring John Margolis’ tour-de-force arrangement and performance. That Lavin’s video of the song evolved so many years after the initial release was a great surprise and gift to these two West Village songwriters. “John and I used to imagine we were like Laurel and Hardy, but instead of pushing that piano up the stairs, it was a refrigerator,” joked Don Rosler.
The refrigerator bumped around a bit, and deals with major and small labels being frozen at the eleventh hour. The album fell through the cracks at a time when the music industry was in major flux, and thus was never officially launched to the press. Christine Lavin didn’t know any of the back-story when she dreamed up the just-released video. She just felt the song was “an undiscovered gem.”
“After hearing the song on Jonathan Schwartz’s radio show on WNYC, I downloaded it at iTunes and included it both in the pre-concert and post-concert music I play at my shows,” Christine said. “I just love it so much, and I noticed that audience members were asking specifically about that song after my shows.  In the back of my mind I was thinking how that song should have a video showcasing refrigerators displaying children’s art, magnets and photographs.  But I didn’t know the singer, John Margolis, or his songwriting partner, Don Rosler, so I just let it go — til our paths crossed on another project — and then I proposed the idea of creating a video for ‘Christine’s Refrigerator.'”

Lavin, Margolis, and Rosler are witnessing not only deeply emotional responses to the song and video, but perhaps the beginning of a new social phenomena of people connecting or reconnecting from examining their loved ones’ photographs or mementos on fridge doors all over the country. As one contributor to the video wrote:

“I cried the first time I saw this video. It makes me think of wonderful times gone by. The very  last photo you chose was of my father and his wife with their grandchildren surrounding them and on his lap. My father is Oscar Brand. This photo was taken about 15 years ago. Dad is 93 now. Still broadcasting on WNYC after 68 years!” Jeannie Brand Derienzo
John Margolis: Christine’s Refrigerator is available to purchase at cdbaby.com, itunes and amazon.

Imani Uzuri mentioned in this wonderful article by Alex Ross in The New Yorker about female composers edging forward.

Jen Chapin listed as one of the top 20 of the 2nd generation (No. 10) musicians born of musicians in Alternate Root