“Homi has natural affection for world cultures, and her bottomless curiosity and adventurous spirit brings to mind the likes of Joni Mitchell and David Byrne. With her sparkling-clear soprano and musical theatre bent she holds center stage on “Ladri Di Biciclette” – a delightful Gilbert and Sullivan-esque tale of stolen bikes on the streets of New York City. The stand-out title track is high-Bollywood-energy-Bhangra-meets-Top-40-pop, while Spanish-language ballad “Una Promesa” features a woodwinds section fit for Lincoln Center. Homi and Hawthorne have enlisted fine world musicians to ensure this album’s authentic travelogue quality.” Janet Goodman, Music News Nashville

“Amanda Homi mixes musical sounds and styles like a flavorful curry on this album. …Homi’s voice is clear, and pure, almost Gaellic in its ringing tone, and she makes it work in material ranging from sounds from an Irish Pub (“Ladri Di Biciclette”) or a Greek tavern (“Cards, Coins & Chaos”). Hints of Middle Eastern strings and Indian percussion permeate “Lorca’s Desire,” while third world grooves intertwine with Dublin festivities on “Shoes.” Through it all, Homi’s voice entices you with her charming joy, creating the image of a tour guide taking you through various back alleys where the music clubs are the most attractive. Nice outing!” George W. Harris, Jazz Weekly

“Amanda Homi is like a kid in a candy store, sampling the goods and finally deciding she wants it all for her new album Till I Reach Bombay. With Graham Hawthorne in the producer’s seat she embarks on a worldwide musical journey, writing a song during each stopover. Her crystal voice ties it together, no matter whether she reminisces about her stay in the cultural hotspot of Athens as an 18-year old (Kaisariani) or about her collection of Shoes (with a joyous accordion as the lead instrument), she finds a way to tame the eclecticism and make the song a part of her musical vocabulary.” Hans Werksman, Here Comes The Flood

“‘Till I Reach Bombay is a distinctive hybrid of a number of musical traditions based loosely in Hindustani musics, a disc I very much suspect Bollywood is going to perk its ears to. Amanda Homi sounds like a cross between Annie Haslam, Sally Oldfield, Carly Simon, and similar chanteuses dancing about in spirited chart-worthy ditties easy on the ear, light on the heart, and more than enticing enough to shake a hipsway around the living room or dance floor…exotic and multi-continental..Homi soars above the band in beautiful incantations.” Mark S. Tucker, Folk & Acoustic Music Exchange

“Till I Reach Bombay is a delicious fusion of sounds, soaked in Indian instrumentation, but she sings in Spanish, integrates funk, folk, and Afro-pop. She’s a great songwriter and a great singer. An artist that can bridge traditional sounds, genre blending, and pop sensibility… a travelogue that shows our desires, passions, and strengths are universal. Amanda rocks it.” John Powell, Angelica Music

“Amanda Homi’s Indian descent and world travels shines through on her latest release, Till I Reach Bombay…marvelous and quirky…Vocally, Amanda has an operatic side, but there are plenty of pop, dance, and neo-classical components. Nothing is awry here.” ~ Matthew Forss, Inside World Music

“Those who dig some worldly flavor should warm to Amanda Homi’s “Till I Reach Bombay.” Inspired by women dancing in protest as part of Arab Spring, she penned stellar lead track “Dancing Girls.” Additional standouts include “Lorca’s Desire,” the title track, “Cards, Coins & Chaos” and “Danger Be Damned.” Jeffrey Sisk, Pittsburgh in Tune 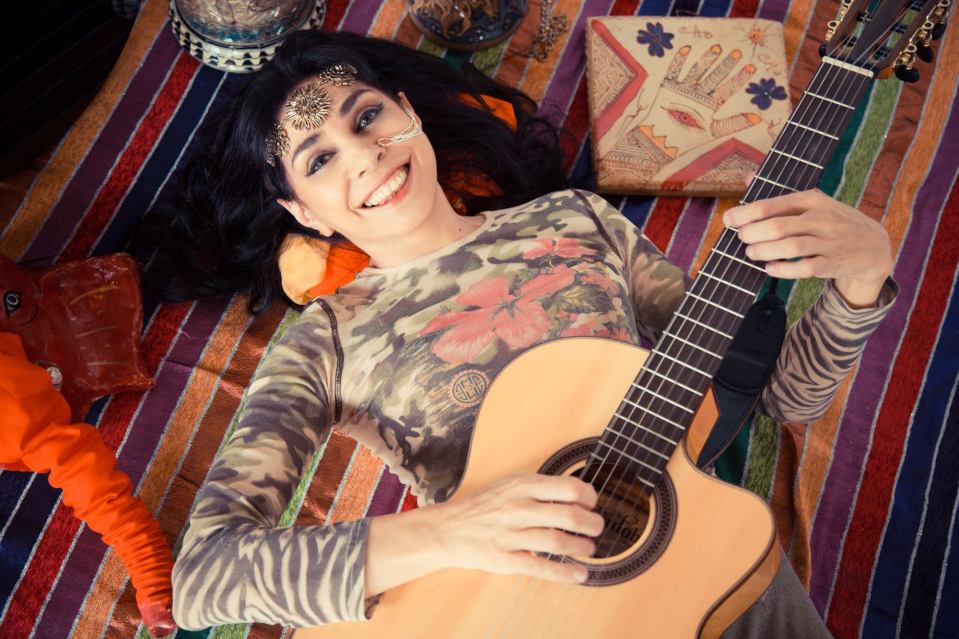 BIO:  London born Amanda Homi has travelled the world, lived in many countries, and currently makes New York City her home. She is a singer, songwriter, percussionist and dancer. Her first album, Drumgirls was released in 2004.  She recently co-produced with Jake Holmes a documentary about Latin Grammy lifetime achievement award recipient, the folkloric Colombian singer  Toto La Momposina. Hosted by Amanda, La Colombiana (Passing the Torch), was shot on location in Colombia. Sonya Alexander, Examiner.com raved, “La Colombiana is a must-see for anyone who appreciates cultural music and tradition.”

The daughter of an actress and a physician, Amanda grew up singing as a child and dreaming of travel. She fell in love with languages, and began her musical travel adventures at the age of eighteen. She has since studied dance and percussion in Brazil and Senegal, sung Rembetika in Greece, Gypsy Flamenco in Spain, filmed a documentary in Colombia, wrote and recorded Reggae in Jamaica and recently performed her music in Agadir with Moroccan musicians.

Amanda is a sought after studio session singer, recording countless songs for various artists and songwriters. She has performed and/or recorded with such formidable singer-songwriters and musicians as Jackson Browne,  Ray Lamontagne, Jane Siberry, Maxwell, Mavis Staples, They Might Be Giants,  Michael Brecker, John Pizzarelli, Grover Washington, Jr., Pete Seeger, Toots Thielmans and Toots Hibbert. Amanda is also a featured singer on E-Street Band Member Everett Bradley’s Holidelic CD. She has also written and sung on many national commercials and wrote the theme to the popular TV show “Bridezillas”. Amanda will be returning to Morocco in April for a series of concerts as a cultural exchange artist for the American Language Institute.