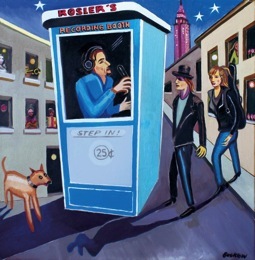 “The song is a valentine to baseball and [Doris] Bauer, for sure,  but also about connection: the way all those lonely voices reach out….”  Ken Plutnicki, The New York Times…

“…one of the year’s most compelling albums.” Jordan Block, Sepiachord

“…achieves a certain melancholy perfection….More of a theater-of-the mind experience than merely an aural one, “Recording Booth” captures its subjects in styles from alt-folk on “But a Dream” to music hall stomp on “Give it a Whirl.” But beyond the music, which is accomplished, the emotional heft is striking.” Peter Chianca, Gatehouse News

“***** (5 out of 5 stars)!  Spottiswoode is also one of the guest vocalists on the beautiful album that New York producer, composer and owner Don Rosler recently created under the name “Rosler’s Recording Booth.”  Mostly known as one of the driving forces behind Bobby McFerrin’s masterpiece “VOCAbuLarieS,” which debuted last year, Rosler, with the help of lesser known but not less talented singers, goes down an extraordinarily beautiful path in which (restrained) orchestral pop melts together with emotional singer/songwriter music.  It delivers the highly exceptional and moving album that unites the best of Randy Newman and Nino Rota, and every time we play it we can’t wait to hear what Don Rosler has to offer us next.  Music of this level is so rare that you want to give it to your friends as a gift because it is an experience that needs to be shared immediately.” Pieter Wijnstekers/Heaven Magazine

“This recording is less a hilarious work of audio/musical theater than a touchingly poetic, expansively novelistic one. Autobiographical, fictionalized, concerned with memory and the elusiveness of time past. Don Rosler’s lyrics tell the story [“Life is but a dream, I know/Have you seen that boat we used to row?”] indivisibly from his intricate, many-leveled arrangements of melodic, poignant musical compositions. Oh yeah, there’s humor, there’s everything — the album is elaborately detailed, creates a world. It flows seamlessly, while rewarding attention. It’s a trip.” Howard Mandel/Jazz Beyond Jazz/artsjournal.com/jazzbeyondjazz

“Rosler has added another off-ramp on the Great American Songbook highway. Rosler’s Recording Booth is a concept album that should find its way to the desk of Mad Men creator Matthew Weiner.  There is a great TV series in these stories and the soundtrack has been taken care of.” Hans Werksman, Here Comes The Flood

“Darkly surreal and often quirkily charming, Rosler’s Recording Booth is one of the most original album concepts in recent months…..You’ve probably at least heard of the hit single, Doris From Rego Park, sung by Rosler himself – Rosler sings to her gently over a hypnotic, new wave pop-tinged keyboard lullaby, almost as one would to a child. As sympathetic a portrait as Rosler paints, it evokes a crushing loneliness. The rest of the album ranges from upbeat to downright haunting. Spottiswoode lends his rich, single-malt baritone to two cuts….Tam Lin sings a pensive 6/8 ballad, a childhood reminiscence with Irish tinges. Terry Radigan takes over the mic on a jauntily creepy circus tune, an understatedly chilling account of homeless through a little girl’s eyes, and a quietly optimistic wartime message home from a young woman to her family….Kathena Bryant brings a towering, soulful presence to the September song Where I’ve Been, What I’ve Done, Jeremy Sisto sings a broodingly psychedelic criminal’s tale, and Rosler himself leads the choir through a deftly orchestrated reminiscence…of singing in a choir.” Lucid Culture

“Rosler’s Recording Booth — This concept CD that reminds me of an era of songwriting when Van Dyke Parks, Harry Nilsson, and Randy Newman were just launching their careers. It features a number of guest vocalists breathing life into 16 of Don Rosler’s sumptuous songs. My favorite is this simple, acoustic guitar folk-pop ballad [“First I Draw The Sun”] featuring the sweet, clear-throated vocals of N.Y.C.-based singer Tamara Hey.”  Dusty Wright, Culture Catch

“Very impressed with the interweaving of the authentic coin-op recordings with the new songs. … like a theatrical production…the music is in keeping with such a performance style, and the nostagic theme wafts through the entire collection.” Alan Dein, BBC Radio

“The great thing about Rosler is that he finds the universal truth through the colorful details, like a finely etched painting. And he’s found a variety of voices for his canvas.”   Kevin Scott Hall, Edge

“Highlights come from the artists Spottiswoode, with tracks like “Where Do I come in?” and actor Jeremy Sisto in his recorded music debut on “Halfway Honest Living.” …. Rosler’s Recording Booth is a unique vision unlike anything else I’ve heard this year.”  EA’s Brain

“Rosler has interesting ideas about orchestration…. So there are surprising combinations of instruments and tonalities, but it all works beautifully. Spottiswoode’s take on Where Do I Come In? brings it all together for me. The arrangement here is startling, with sudden shifts in mood and tonality…. There are many other fine performances on this album. I want to know more about Spottiswoode, and also about Terry Radigan, who contributes four wonderfully varied performances here. Other listeners will find other gems as well.” Darius Rips, Oliver di Place Blog

“I gotta say Rosler’s Recording Booth is one of the most interesting CDs I’ve heard in 2011….’Doris From Rego Park’ is an instant classic….” Eric Cohen, WAER Music Director

“Totally enjoyed ‘Rosler’s’…It is all good, new and quite refreshingly different, to say the least.”  Mark Caldwell, WAWL