Our website is being updated for December 2020, but in the meantime, check out some of our favorite songs from our artist/clients, past & present.

TIME: 8:00 P.M. – 11:00 P.M.
8pm The Moonlighters
9pm Curtis Eller
10pm Piñataland
HOW MUCH: Suggestible donations
8pm Bliss Blood began her career as a vocalist and songwriter in the band Pain Teens in Houston and continued to write music and perform with The Moonlighters and Delta Dreambox, among other bands, in New York City since 1995. Her band THE MOONLIGHTERS have been a part of the New York City jazz and pop music scenes since forming in 1998. Based around a core of harmonized vocal duets backed by warm acoustic instruments including Hawaiian lap steel guitar, ukulele, guitar and bass, they explore traditional and classic tunes with a unique, romantic approach that is appealing to listeners of all ages. “The Moonlighters are a charming local band….” The New Yorker
9pm Curtis Eller is one of the most eccentric and individual performers in today’s acoustic music scene. The wild-eyed vaudevillian’s banjo-driven songs describe a dreamlike vision of American history where all points in time have collapsed into one. Elvis Presley and Abraham Lincoln can rub shoulders with Buster Keaton and Joe Louis against a backdrop of circus disasters, presidential assassinations and sweatshop fires. “Eller’s songs are an American History 101 course in waking life. ”  Joey Hood, American Songwriter
10pm Pinataland‘s theatrical, darkly romantic music conjures lovelorn astronauts, murderous Mormons, and the atom bomb. Tonight they bring their energetic stage show of historical mysteries, performing songs from their acclaimed fifth CD Hymns for the Dreadful Night. With Robin Aigner and Doug Stone on vocals, Bill Gerstel on drums, Dave Wechsler on piano, Ross Bonadonna on bass, and Deni Bonet on violin. “America’s best bet for singalong historical fiction.” – Tris McCall, NJ Star Ledger 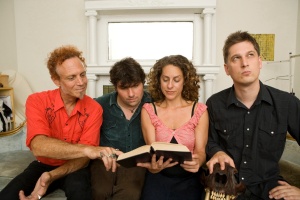 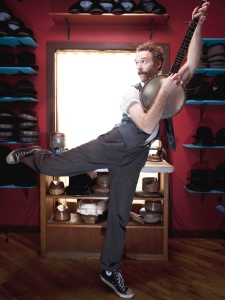 The Moonlighters at the Living Room